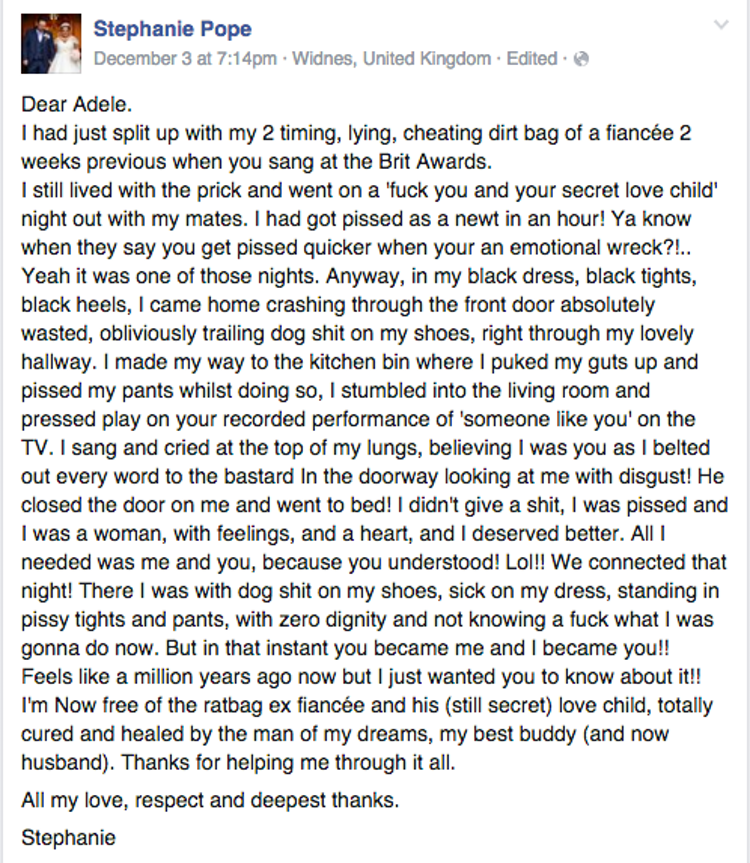 Mashable reports Stephanie, a woman from Northern Ireland, unleashed this glorious profanity-laden account of how she finally got closure and dumped her “lying, cheating” fiancé thanks to Adele. She shared it to the singer’s Facebook page and the post quickly went viral (with more than 3,000 shares so far), as people from all over the world learned just how to do a badass breakup with the fool who broke your heart.

I had just split up with my 2 timing, lying, cheating dirt bag of a fiancée 2 weeks previous when you sang at the Brit Awards.I still lived with the prick and went on a ‘fuck you and your secret love child’ night out with my mates. I had got pissed as a newt in an hour! Ya know when they say you get pissed quicker when your an emotional wreck?!.. Yeah it was one of those nights.

Anyway, in my black dress, black tights, black heels, I came home crashing through the front door absolutely wasted, obliviously trailing dog shit on my shoes, right through my lovely hallway. I made my way to the kitchen bin where I puked my guts up and pissed my pants whilst doing so, I stumbled into the living room and pressed play on your recorded performance of ‘someone like you’ on the TV.

That’s the moment that changed everything, she said. “I sang and cried at the top of my lungs, believing I was you as I belted out every word to the bastard in the doorway looking at me with disgust!”

Then, her boyfriend “closed the door on me and went to bed,” she wrote.

I didn’t give a shit, I was pissed and I was a woman, with feelings, and a heart, and I deserved better. All I needed was me and you, because you understood! Lol!! We connected that night! There I was with dog shit on my shoes, sick on my dress, standing in pissy tights and pants, with zero dignity and not knowing a fuck what I was gonna do now. But in that instant you became me and I became you!! Feels like a million years ago now but I just wanted you to know about it!! I’m Now free of the ratbag ex fiancée and his (still secret) love child, totally cured and healed by the man of my dreams, my best buddy (and now husband).

DAKORE AKANDE STEPS OUT WITH HER DAUGHTERS, SEE PHOTOS