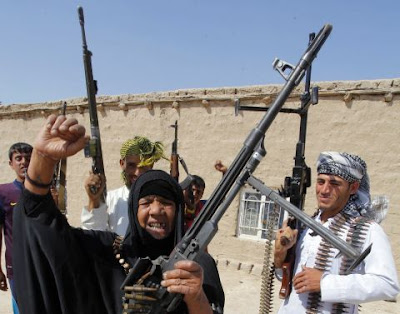 An Iraqi woman has reportedly killed an Islamic State (Isis) militant commander Abu Anas. She allegedly killed Anas three months after he forced her to marry his militant comrades.

Saeed Mamouzini, spokesman for the Kurdistan Democratic Party (KDP) in Mosul, told the al-Sumaria TV network that the woman killed the terrorist, known as Abu Anas, in Tal Roman district, west of the IS-held city of Mosul.

The report comes two days after IS militants brought non-Iraqi women to Mosul as sex slaves, following an order by Ibrahim al-Samarrai (aka Abu Bakr al-Baghdadi), the regional IS leader.

Hana Nawafili, a spokeswoman for the Iraqi Observatory for the Defence of Battered Women, told Arabic-language al-Maalomah news agency on 18 July that IS terrorists had gang-raped seven female residents ofFallujah, situated about 69km (43 miles) west of Baghdad, and then murdered them.

A 12-year-old girl who escaped the group, ISIS told the New York Times that the man who abused her explained to her that the sickening act he was about to commit was not a sin because she was not Muslim.

In fact, he claimed her faith not only gave him the right to rape her, but encouraged it. After tying her up and gagging her, he knelt beside the bed and prayed. Afterwards, he prayed again.

The girl, who was interviewed in a refugee camp, said: “I kept telling him it hurts – please stop.

“He told me that according to Islam he is allowed to rape an unbeliever. He said that by raping me, he is drawing closer to God.”

Muslims throughout the world have condemned ISIS for using the Islamic faith to justify their sickening acts.

The guy who once called Buhari ‘brain dead’ meets his wife and son and takes pics with them.

The Lagos State Government has ordered the closure of public and private schools in the state indefinitely.
This was announced in a press statement by the state’s Head of Public Affairs, Ministry of Education, Kayode Abayomi, on Monday.
The statement was titled, ‘Lagos directs students to stay at home’.
It quoted the Commissioner for Education, Mrs. Folasade Adefisayo, as saying that the schools were shut down over “tension generated by the #EndSARS protests.”
The statement read in part, “The Lagos State Government has directed all pupils/students in public and private schools to stay at home following the tension generated by the anti-SARS protests.
“A new date of resumption for all classes will be announced as soon as possible.”
Adefisayo added that “the safety of the pupils/students, parents and all staff working in schools is paramount at this critical period”.
She however advised parents to “keep an eye on their wards and not allow them to be used as willing tools in the hands of those who might want to hijack the protests to unleash mayhem on the society”.
The Commissioner also encouraged schools to “utilize other means of distance teaching and learning i.e radio, television and online media as they have been doing during and post the recent COVID-19 lockdown”.
Continue Reading

A Siberian Husky in Denver was accused of killing a neighbor’s cat and now sits in an animal shelter awaiting a trial.

Zuma, the 12-year-old dog who lives with Kevin and Valerie Kickham, reportedly wandered over to a neighbor’s yard in Central Park early August and took the life of a seven-year-old Tabby cat, according to FOX 31 News.

“It was only this one moment in time that I lost track of Zuma and something did occur,” Kevin confessed to the outlet with Valerie by his side.

Denver Animal Protection eventually picked Zuma up and has held him in their shelter since the alleged incident.

While Kevin and Valerie “feel bad” about the loss of the cat, they are very concerned for Zuma, whom they have sheltered since he was eight weeks old and call “son.”

“I remember him taking part of his first Thanksgiving turkey,” Kevin recalled fondly. “We fed him turkey in the bowl and next thing you know he actually jumped up and grabbed a piece of turkey for himself.”

A spokesperson for the Denver Animal Protection told the outlet that a judge may exonerate Zuma. If found guilty, however, Zuma could be put to sleep or relocated “somewhere outside the city.”

While they await the trial date set for mid-November, the Kickhams are allowed weekly visits to the shelter.

“Both of our last visits he wasn’t excited,” Kevin told the news source. “It’s been very hard.”

With the life expectancy of a Siberian Husky ranging from 12 to 15 years, the couple are fearful they may not have much more time together with Zuma.

“We know that it’s not going to be much longer,” Kevin added. “We’ve cherished every moment with him.”

The outlet said they have reached out to the family of the feline victim, but there has been no response.