You’ve gotta love the internet for bringing trends to our attention that we might not otherwise imagine exist. A case in point is sperm facials, something beauty vlogger Tracy Kiss is celebrating for soothing her sensitive skin. Try not to gag, now.
The theory
In her Semen Facial Tutorial on YouTube, the 28-year-old explains how she uses it to soothe her rosacea, a skin condition that causes flushing to the face which she’s battled with her whole life. Sperm, she says, helps rejuvenate her complexion so she can more easily manage her redness. (How she discovered that this worked for her we’re not so sure.)

So, her male friend drops off a semen donation in a takeaway pot from the Chinese and she uses it as quickly as possible so it’s fresh. What he’s eaten and how hydrated he is, Tracy informs us, impacts the consistency of the sample, but she knows he’s healthy which is the main thing.

The genius reason to use orange and green conceale…

This is what it’s like when your makeup-free selfi…

6 men demonstrate the amazing power of ‘no makeup …
She explains that, “semen builds babies that comes out with beautiful skin – it also makes my skin very soft” and while it doesn’t cure her redness, she claims it definitely reduces it.
The process
Three-to-five days a week, Tracy does a facial, applying the semen directly from the pot on to cleansed skin which has an instant cooling effect. Hmm.

It tightens after a few minutes and then it’s ready to wash off with cool water – at which point “it feels glossy like an oil or a wax”. Really?

Like an all-natural moisturiser, she says it leaves her skin hydrated and soft, with an improved texture. That could be the proteolytic and other enzymes that sperm boasts – which may act as an exfoliant. To be fair, her skin looks pretty radiant at the end.

It certainly won’t turn everyone on, but maybe – just maybe – she’s onto something… (Safety first though – we recommend asking your doc if it’s recommended.)

ladies what do you think?

Here’s a peek inside Khloe Kardashian’s VERY organised fridge And now we have major lunch envy.

Actress Stephanie Okereke Linus has cut off her long hair

Sporting a low cut hairstyle in a new photo shared to Instagram, the mother-of-one wrote: “Believe you can and you’re halfway there – Theodore Roosevelt.” 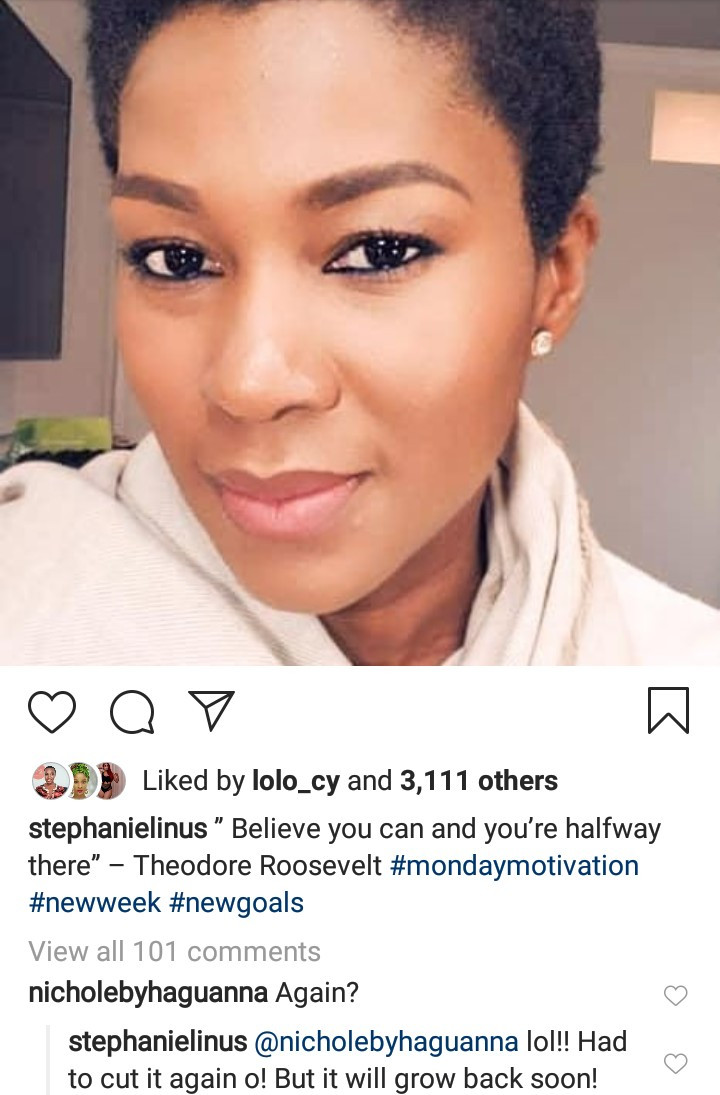 Kim Kardashian West is setting the record straight about her nose.

The reality star, 38, admitted she loves laser treatments to treat stretch marks and even documented her first Botox experience on an episode of Keeping Up with the Kardashians in 2010. But there’s one cosmetic procedure she hasn’t gotten: a nose job.

“I never had my nose done,” Kardashian West revealed as she got her makeup done by her longtime pro Mario Dedivanovic during The Master Class in L.A. on Feb. 9. “Everyone thought I did, and I said wait until I have kids because your real features come out.”

She added on Twitter, “I said you will see when I have kids, they will have the same nose as me.”

While he did her makeup in front of a room full of aspiring makeup artists and fans, Dedivanovic explained that Kardashian West has a small bump on her nose, which he discreetly hides using a nose contouring technique.

Christmas is quickly approaching (side note: How is it October rn?!) and you already know Rihanna has BIG plans for some amazing festive Fenty Beauty products. Case in point: On Wednesday, she gave fans a sneak peek of a of a new eye and cheek palette on her Instagram and it’s SO gorgeous.

The singer/actress/boss beauty businesswoman unveiled it at an appearance in Sydney, Australia, where it’s already available for purchase. However, for everyone else, it won’t be released until 12 October. That means you’ll to wait just a *little* longer to get your hands on it, but in the meantime, you can keep staring at the mesmerising metallic colours.

The shades are described as “fire and ice” due to the combination of fiery, deep hues, like copper and bright orange as well as cool-toned ones like blue and mint green. The super metallic colours can also be all be applied as eyeshadow, highlighter, or BOTH as Rihanna illustrated in her Instagram pic. And, it’s the same cream-to-powder formula that she uses in her other palettes, so you know the application will be seamless and easy to blend.

The seven-shade duo palette is just the first product in a whole new #CHILLOWT holiday collection, so there’s no doubt Rihanna has some more product teases in store for us. As a major surprise to fans, she recently dropped three additional Stunna shades in one week (aptly named #STUNNAWEEK), so basically if you keep refreshing her Instagram page religiously (like I do), there’s no doubt she’ll post about more exciting new products soon.