personality, Kelechi Ikpe has said that one of the reasons why depression is on the rise is because men are disturbed by women taking up leadership roles.

Four African women sat d r mmmown to discuss the rise in depression in our society in the 21st century. The group was made up of Lolo Cynthia, Kelechi Ikpe, Rafieka Williams, and Wathoni Anyansi.

As they spoke about depression, Kelechi came up with a point that she believes has led to the rise in depression. According to her, A lot of men are depressed because a lot of women are taking up leadership roles.

Kelechi Ikpe’s opinion has generated massive outrage on Twitter with a lot of users calling her out. 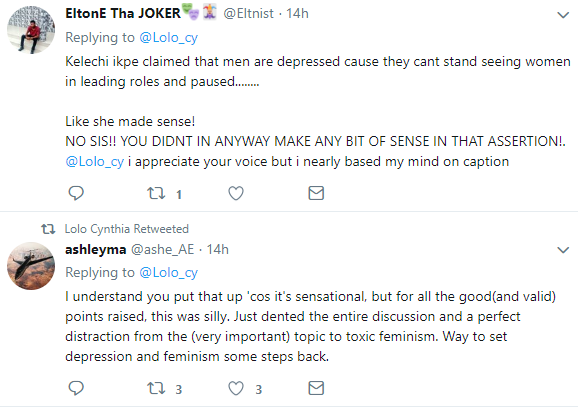 This part of the video where @kelechitalks gives her. Opinion have led to huge outrage on twitter. –

Let me say this, I believe we are quick to jump on anything that remotely discusses gender because of the clime we at – that being said, I am not innocent because the heading was click bait; for this I take full responsibility. –
However this was an interesting point and we were corrected that depression might not be the best word to describe it.. –

In this society we live in, we can be honest and realistic that there are a lot of changes happening especially with women. The last century have led to lots of breakthroughs FOr women and also brought up conversation around the roles we had once taken up. –

I believe that many of us have our identities attached to these roles and with this shift, it can be overwhelming to find where you belong in the ever changing world. –

My co-host made sure to highlight that both genders were struggling with this shift as women have also had to step up into certain roles that they didn’t have to engage in before. –

It will do us no good to continue to give into the outrage! We can’t fight for change and not be willing to discuss how these changes are affecting the dynamic of day to day activities and our views on identity and life in general. –

Watch the video below. 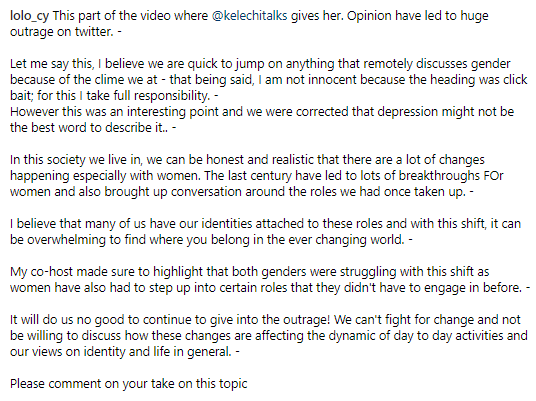 President Buhari is currently in a closed door meeting with former leaders of the country.

According to Bashir Ahmad, the Personal Assistant to the president, the former leaders in attendance include Olusegun Obasanjo, Goodluck Jonathan, Abdulsalami Abubakar, Ernest Shonekan and Yakubu Gowon.

Genevieve Nnaji accused the government of not listening.

Genevieve Nnaji has reacted to the formation of a new unit to replace the disbanded Special Anti-Robbery Squad, SARS

the Inspector General of Police, IGP, Mohammed Adamu on Tuesday announced the formation of the Special Weapons and Tactics (SWAT) Team to “fill the gaps” arising from the dissolution of SARS.

Reacting, the actress in a tweet via her Twitter account on Wednesday said implementation of the rules should be a sign that the Government is listening to the outburst of the people they are leading.

She also said that the officials who are guilty of killing innocent protesters should be arrested and charged for murder.

Cardi B met with US presidential aspirant Bernie Sanders on Monday to film a 2020 presidential campaign video.

The campaign was aimed at appealing to young voters ahead of the 2020 US elections, Bernie Sanders told CNN in an interview as he arrived for the shoot.

He said: “We (are) working on a way to involve more young people in the political process. The future of America depends on young people. They are voting in large numbers, but not large enough numbers.”

The video was filmed at the TEN Nail Bar, a local nail salon owned by two black women.

Cardi B wrote:  “Not me, US. Thank you Senator Bernie Sanders for sitting with me and sharing your plans on how you will change this country. A couple of weeks ago I asked my followers if you had the opportunity to have a question answered by a democratic candidate what would it be ? I got a lot of submission and selected the most popular questions to get answered. Stay tuned to see how he will fight for economic, racial, and social justice for all. Together, let’s build a movement of young people to transform this country.LETS LEARN OUR CANDIDATES!”