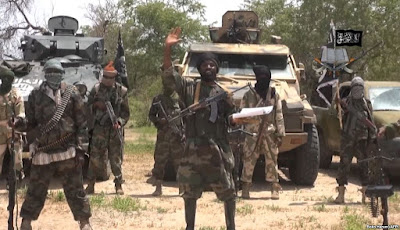 30 members of the Boko Haram sect were killed in a gun battle with Nigerian troops assisted by the local vigilantes in the early hours of yesterday at the border villages between Adamawa and Borno states.

This happened after Boko Haram members on Sunday invaded Gwoza local government area of Borno State, killing nine people and destroying houses.
According to reports, Nigerian troops had laid ambush on the insurgents between the border villages of Kirchinga and Imirsa, following intelligence reports on the movement of the sect.

“Following information about the movements of the Boko Haram insurgents we got, we decided to lay an ambush in the wee hours of Monday.

“Our efforts yielded results as we succeeded in killing over 30 of the insurgents after a fierce gun duel.

“We confiscated many weapons from the invading terrorists, including AK 47 assault rifles, bows and arrows and other dangerous weapons,” the source said.

“The insurgents who disguised as local vigilante mounted road blocks across the highway and pretended to be carrying out routine checks.

“The soldiers were lured into the booby trap of the insurgents who immediately swooped on them and killed three soldiers and abducted one of the soldiers,” the source said.

In regards to the Kirchinga village in Madagali local government area of Adamawa State, a fierce gun duel took place between Nigerian troops and Boko Haram insurgents who launched attacks on the village on the weekend.

The terrorists, according to a source wounded many people after looting their foodstuff, including livestock, and fled without confrontation from the armless villagers.
Sunday is a market day where a few persons from surrounding villages of Limankara and other communities patronize the town for businesses.

On the recent attacks on Gwoza, another source who was on his way to Gwoza from Maiduguri at the time of the attack had to spend the night at Limankara, stating that he was compelled to do so because the military had blocked the only existing Madagali- Limankaa- Gwoza road.
The source said he was on his way to Gwoza with a truck of cement and other building materials for sale, following relative peace witnessed recently in the town, but had no option than to spent the night at Limankara before moving back to Madagali town of Adamawa.

Gwoza was declared as an Islamic Caliphate by the group’s leader, Abubakar Shekau last year when his fighters seized the town which is south and about 150kms drive from Maiduguri, the state capital but has been recaptured by the Nigerian military.

There is now a bikini that can depollute the ocean’

What Men Really Think About Sex After Marriage.

The 19th Policy Meeting on Admissions to Tertiary Institutions in Nigeria has approved 160 and above as the national minimum cutoff mark for admission into state and federal Universities for the year 2019.

The decision was taken at a meeting held at Bola Babalakin Auditorium, Gbongan, Osun State today Tuesday June 11th. It was also agreed that the minimum UTME score for admission into private Universities should be 140.